Blog Tour: The Earl Next Door by Charis Michaels


Enter to Win a 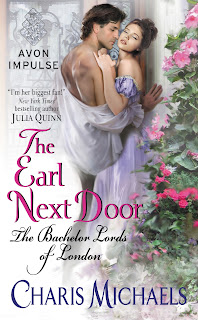 THE EARL NEXT DOOR

Charis Michaels makes her Avon
Impulse debut with the first book in her new historical romance series, The Bachelor Lords of London...featuring a brooding earl and the American heiress who charms him.


American heiress Piety Grey is on the run. Suddenly in London and facing the renovation of a crumbling townhouse, she’s determined to make a new life for herself—anything is better than returning to New York City where a cruel mother and horrid betrothal await her. The last thing she needs is a dark, tempting earl inciting her at every turn…


Trevor Rheese, the Earl of Falcondale, isn’t interested in being a good neighbor. After fifteen years of familial obligation, he’s finally free. But when the disarmingly beautiful Piety bursts through his wall—and into his life—his newfound freedom is threatened…even as his curiosity is piqued.


Once Piety’s family arrives in London, Falcondale suddenly finds himself in the midst of a mock courtship to protect the seductive woman who’s turned his world upside down. It’s all for show—or at least it should be. But if Falcondale isn’t careful, he may find a very real happily ever after with the woman of his dreams…

An Interview with Charis Michaels 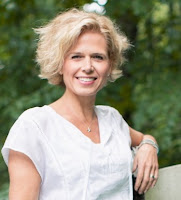 Thank you for taking the time to hang out with me (us) today.

Let's talk your newbie status at Avon...how does it feel to be the new girl in town?  How do you feel your historical romance stand out among the crowd?

Well, I haven’t been privy to the secret handshake, but I just received my team shirt, and I love the rhinestones.  I’m kidding, of course, but only a little.  The sense of family and support from both the professionals at Avon Books and the other Avon authors has been phenomenal.
During a romance-writer conference last summer, I was invited to two Avon-author events in New York City—one in their downtown offices and the other a cocktail party in Highline.  When the invitations arrived some weeks before, I was certain there had been some mistake.  Yes, I had signed with Avon, but my books would not come out for nine months.

I sent some feelers out and guess what?  No mistake, they included me, just the same as Avon authors whose work I have admired for years.

From the moment I stepped off the elevators (and let me just tell you, the publishing offices of Avon books does, in fact, look just like a movie set, down to the framed iconic book covers hanging on the walls), I was embraced by everyone.

For a writer whose goal publisher had been Avon Books literally for years, it was a dream come true.

For a terrified newbie who was chanting, Act naturally in my head, it was an opportunity to blurt out, “How is your brain?!” to New York Times best seller Sarah MacLean (who I knew had undergone brain surgery earlier in the year).  Other awkward moments abounded, all in service to my nerves and inexperience, but I left feeling as if I truly was part of the Avon family.

How do my books stand out?  Well, I try to deliver three things to readers:  humor, hopefulness, and conflict that stands the test of what I like to call a good talking-to.  That is, my characters have more to overcome than simple misunderstandings or some impasse that could be solved with a good, long talk.  These characters may be made for each other, but they have to work for their happily-ever-afters, and getting there is so much fun.

Do you think that writing historical romance is one of the most difficult genres to write?  Research wise?  Readers Critique wise?
Most difficult? Well, I adore history, so for me, research is part of the fun.

For example, the heroine in The Earl Next Door, Piety Grey, has inherited a small fortune from her late father.  Because Piety is a young, unmarried female, however, she must fight tooth and nail to retain control of the money.

Obviously in 2016, most daughters can inherit an estate with no gender-based legal fight, but Piety struggles with emotions and choices that modern-day female readers will easily recognize.  Piety is resolute, determined, and inexhaustible; but she is also susceptible to self doubt, and discouragement when she’s met with certain toxic people in her life.  We all know how this feels, no matter our place in time.

I simply love 19th-century problems that conjure up timeless emotional responses from us here in the modern day.

What is your favorite part of writing historical romance?  The scoundrels and rakes?  The ladies who speak their minds?  The lovely wallflower waiting to be noticed?  The clothes? The setting?

I love so many things about historical fiction, but most perhaps for its intrinsic jumping-off points for tension-filled plots.

Consider, if you will:  Arranged marriages, marriages of convenience, ineffective chaperones and beautiful governesses, “ruined” debutantes, second sons, illegitimate byblows, unexpected inheritances, gambled-away dowries.  You can’t throw a riding crop at the Regency era without hitting a tension-rich scenario to put a stubborn hero and heroine through their paces.

The plot of The Earl Next Door explores two neighbors who agree to marry “in name only” to save the heroine from a far worse fate.  Their plan is to annul the union when the threat against the heroine has passed.  The only catch?  They cannot consummate the marriage if they truly intend to annul it later. (Spoiler alert – well, have you read a romance before?  You can probably guess.)

Annulments and marriages “in name only” are hardly common place in modern day but are perfect examples of delicious social constricts that make historicals so much fun.

If you had to choose only ONE historical romance to read for the rest of your days, which would it be?  and Why?

Easy call!  Lord of the Scoundrels by Loretta Chase.  I have four signed copies and I read the whole thing aloud to my husband while he was fishing on our tenth date.  TMI?
Why:  World’s smartest, most positive, most capable and compassionate heroine pitted against the world’s most bitter, wounded, super masculine hero who cannot live without her.  But he fights it.  Oh, how he fights it.  And she never lets up.
I still can’t believe that I write for the same publisher as romance genius, Loretta Chase.

Tell us a little about the Debut Series with Avon, The Bachelor Lords of London.

The Bachelor Lords trilogy was born on a street in London called Henrietta Place. It’s a real-life street, four-blocks long, between Marylebone Lane and Cavendish Square in London, and I walked it many times when I was a young newlywed, living abroad for the first time.

Like so many London streets, Henrietta Place has now been given over to modern buildings, but a few hallmarks of 19th-century residential London still remain. Leafy Plane trees. The square at the end of the block. Even a townhome mansion or two. But what really captured my imagination was the name.

Henrietta Place.
It was just so… English.
I knew the first time I discovered Henrietta Place that eventually I would write the stories of the 19th-century inhabitants who lived there in my mind.

And so began the opening line of The Earl Next Door: “Nothing of record ever happened in Henrietta Place….” The perfect springboard for three books of recordable things to happen up and down the street.

Enter the bachelor lords of London: Two brothers and a friend who relocate to London and settle, for one reason or another, in Henrietta Place. They each live on the street long enough to meet the colorful neighbors, refurbish or deface the property (depending on the lord), and unwittingly discover their own, happily-ever-afters.

Here they are in quick-take form:
THE EXILE: Lord Trevor, newly returned from parts unknown. Back in London to claim an earldom and disappear again.

THE PARAGON: Lord Bryson, disgraced viscount, rebuilding his life. In search of a viscountess, discreet and pure, a model of propriety. A proper, perfect wife.

THE SCOUNDREL: Lord Beau, a naval officer and rakish second son. His brother’s title has landed in his lap, and he’ll do whatever it takes to prove he’s unfit to be a lord, bachelor or otherwise.

Do you already have a favorite character from the series?
It’s clichéd, but I have grown to love so many of the characters who populate the Bachelor Lords.  If I had to select one, I’d say Lady Frances Stroud, the Marchioness Frinfrock, the eighty-year-old busybody who presides over Henrietta Place with her nosey intrusions, painfully honest remarks, and when you least expect it, her compassion.  She was a hoot to bring to life.

Congrats on the debut, and I can't wait to see what is in store for the readers with the Bachelor Lords!
Well thank you for allowing to me to chat about this series.  I hope readers will enjoy reading it as much as I enjoyed writing it.

CHARIS MICHAELS is thrilled to be making her debut with Avon Impulse. Prior to writing romance, she studied Journalism at Texas A&M and managed PR for a trade association. She has also worked as a tour guide at Disney World, harvested peaches on her family’s farm, and entertained children as the “Story Godmother” at birthday parties. She has lived in Texas, Florida, and London, England. She now makes her home in the Washington, D.C.-metro area.