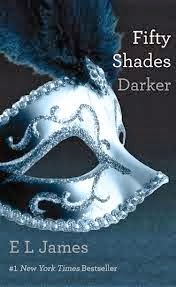 So, as I leaned a little closer to peek down the rabbit hole, I continued to read the second book of the Fifty Shades Trilogy entitled Fifty Shades Darker. This book picked up right where Fifty Shades of Grey left off where Ana has left Christian and has begun her post-college life in Seattle, WA with a new job, a new condo (thanks to the generous parents of her BFF Kate), and a broken heart. Yep, she  finally realized that the man she had been engaging in all kinds of kinkery was cray cray and could not give her what she needed
in terms of "normalcy" when it came to a relationship. That "Thang", as in Ana, has cried and gone days without eating. But don't you cry for her Argen-Tina, after three days, Christian has sent her flowers to congratulate her on her first day of work and after a few more days he reminds her of a date they had set to go to Portland to see her friend Jose's photography exhibit. And as you guessed it, they reconcile and the shenanigans begin yet again but this time around Christian offers Ana "normal" because he thinks that's what she needs but Ana encourages kink-freakiness because that is what she thinks he needs. Basically, they are both just crazy in love.

This installment of the Fifty Shade Trilogy is action packed to the hilt. There is Ana getting unwanted sexual advances at work,  being held up by gun point at her apartment by one of Christian's deranged ex-play thangs, a kidnap attempt, an appointment with Christian and his therapist, a marriage proposal, the disappearance of Christian, and a hair cut. Oh, and let me not forget how she was confronted and threatened by Christian's teenage abuser.While on the other side of crazy, Christian is buying up Seattle to include, clothes, cars, jewelry, publishing houses, mansions, and therapy for the sick and shut-in. He is also falling out the sky in his helicopter and have a temporary breakdown...like really... old dude just blanks out...I'm talking catatonic shock here folks.

In the end, all appears happy for the love-struck twosome, Ana Steele and Christian Grey. They worked out some of their kinks and she even gets to rub her hands over parts of his body due to the nicely illustrated lines that have been drawn. Be back soon for Fifty Shades Freed! Laters.
Posted by Run and Read That... at 8:39 PM