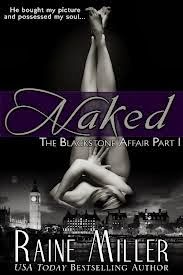 I started reading Naked by Raine Miller, because I was looking for something a little different from my usual. Just kidding... I like my usual pretty well… thank you very much! Anywho, this book was a pleasant surprise and had a little of everything within its 115 or so pages as it introduced its readers to the Blackstone Series. Its main characters experienced tragedies in their pasts that forever changed their lives, but set them up, to be in the right places, at the right times to find each other regardless of how sketchy the circumstances may appear.

Brynne Bennett is an American girl living in London, England as the city is a buzz for the upcoming 2012 Olympic Games. She is graduate student who has an assistantship restoring paintings and is a model of the artistic persuasion. Conversely, that Ethan Blackstone, Mrs. Miller did a brilliant job describing this man. I mean, the way she described him through the words scattered on paper was just plain ole everyday hotness. He was probably one of the realest “rich book boyfriend’s” I’ve been privy to read about who was also ex-Special Forces, a former P.O.W., and owns a highly successful security firm with connections with the Royal Family and anybody that is somebody.

After some reluctance, Ethan agrees to protect Brynne, the daughter of an old friend, without her knowledge. They meet at art show where Brynne’s goodies are artistically on display and Ethan instantly swoons. As Ethan swoons, Brynne feels a slight pitter patter of her own heart when she laid on eyes on that man. These two blazed once they came to an agreement of timing and space to get things crack-a-lacking.

However, as things processed seeming well, their pasts creep in and alters their better laid plans. Although they endured night terrors and such, they were not immunized to the one secret that sends Brynne running for the hills like a crazed woman. This secret also left Ethan literally tearing down walls and professing his love. And who would have thought that the man she loved the most, her dad, would be the one to deliver such news.

Naked was written from Brynne’s point of view and was definitely a good read that I left me looking forward to reading All In, book two of the Blackstone Series.