All In (The Blackstone Affair #2) by: Raine Miller 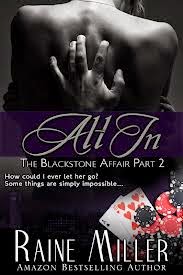 After the dramatic ending of Naked, book one of The Blackstone Affair, I could not stop at just knowing that two main characters were left emotionally disarrayed. I mean there were damaged walls

and hearts, so at the very least I had to find out if there was structural damage as a result of Ethan's fist meeting the wall at his office. So, I continued on reading and I must say I was not disappointed. I was pleased to see that this book was a little longer and had a lot more drama and such.

Now that Brynne knows that her father has hired Ethan to watch over her because of an unknown threat to her safety, the young and eager couple is at an impasse, a sink hole, you can say, in the road to their HEA.These two go 10 long days without seeing each and after Ethan sought refuge and advice from his father, he decides to write Brynne a letter and wait. Brynne calls Ethan after she receives the flowers and this is when their story begins again. Ethan feels Brynne needs him and rushes off to meet her and they reunite as Brynne explains things that have been occurring and Ethan is in full fix-it mode. In this installment Ethan finally knows Brynne's secret and vows to tear down hell and high water to keep her safe while battling his own demons. The deeper their feelings get and their connection grows Ethan is haunted by images of his own past.

All in all this book had a tad bit of suspense, tons of drama, the usual kinkiness you could expect from this genre, a dash of romance, precious moments and promises of forever. I liked it and again the story line was a pleasant surprise. On to the next one with Eyes Wide Open coming up!
Posted by Run and Read That... at 3:16 PM