Vampire Next Door by: Angela Snyder 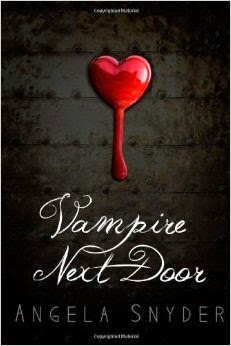 What can I say about this novel by Angela Snyder besides it was pretty darn good?!?!  I was pleasantly surprised at how this novel grabbed my attention and held on to it until the very last page. I have had case of book hangover after reading about the life and loves of Jane Doe, the heroine of the story. The novel begins with a hunter finding an unconscious woman in the woods with no identification and once she awakens after being in a coma for three weeks, she doesn't have a single memory of the life she lived before her mysterious accident.

Fortunately for her, she is cared for by a very compassionate man Dr. Jack Walker whom she begins to rely on to get her through her recovery as her only friend. However, she cannot shake the occasional feeling that she is being watched. But luckily for her and us the readers, she is being watched by the sexily mysterious Sebastian Alexander, who only wants her happy.

Nevertheless, the relationship between Jane Doe and Dr. Walker grows, they get married and it appears a happily ever after is on the horizon until tragedy strikes again.  Dr. Walker is mugged and killed on or around their anniversary. As Jane is slowly recovering from her loss,  the mysterious Sebastian moves into the house next door.  She feels a pull in his direction however; she is being dragged in another by her deceased husband’s twin brother. Now, I just thought that was a bit creepy and fortunately for me, I wasn’t the only one because the thought never quite sat right with Jane.
This book had its fair share of suspense, drama, and swoon worthy moments without reading like the cliché paranormal vampire novel. Not that I have read all that many, it was not overdone; just enough for you to know that a vampire was in the storyline. I would definitely recommend this book for anyone who loves a good and well developed story that moves over time as in years and months instead of days and weeks.  Well done Ms. Snyder!
Posted by Run and Read That... at 10:33 PM