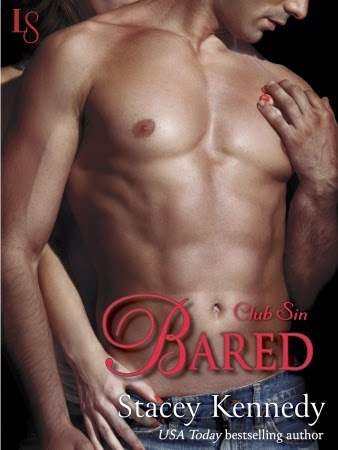 However, the real story began outside of the club where these two led very separate and "normal" lives during the week. Cora is a loving aunt, sister, and a compassionate social worker. While Aiden, is a devoted son and successful attorney who is still in love with his fiance that was killed in a tragic accident. But when the weekend arrives the tom-kinkery ensues and these two transform into members of Club Sin and are exclusive to each other. They only "play" with each other until everyone except Aidan sees that Cora has fallen head over heels for him. Aidan then decides he and Cora need to spend some time together outside of the club to reconnect, however, Cora falls even harder for him and Aidan is still oblivious to her feelings him and his own for her.

Overall, this was an okay read that gave some insight into what happens in the normal life of partakers into the BDSM lifestyle. Although Bared is a stand alone in the Club Sin series, I would recommend reading the first book entitled Claimed, because the main characters are mentioned quite often in Bared and I would have liked to know their story since tidbits were undertones of Cora's full... story. So if you are (1) tired of the gazillionaire and the doe-eyed 20-something year old but still have a happily ever after or (2) you want...what I think...although I could so be wrong here...a realistic perspective of the lifestyle of Doms and Subs yet still have a happily ever after, this is the book for you.

A complimentary copy was provided by Netgalley in exchange for a honest review.
Posted by Run and Read That... at 7:23 PM