Make Me (The Submission Games #1) by Tamara Mataya 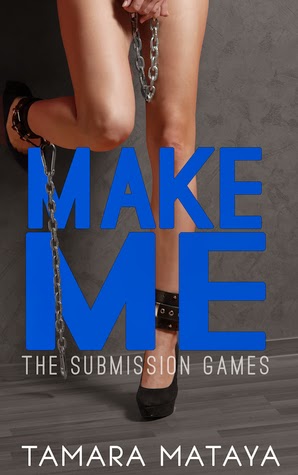 Darko Aralica immediately recognizes Sloane as a submissive, but her judgmental arrogance about kink is an intriguing challenge. When she begs him to teach her submission, he accepts. He’ll prove Sloane’s rightful place is at The Underground—or tied to his bed.

Darko begins Sloane’s training, guiding her through sensual scenes that strip away her preconceptions about the lifestyle – and herself. Sloane thought she wanted the truth.
Now I have to begin this review with a disclaimer. I do not have an interest in reading novels that are in your face kink foolery or novels that have the act of expressing ones preference in the BDSM lifestyle. So, initially when I was asked to read this by the author, I was very apprehensive. I just knew that it would be too much for my liking and I would instantly be turned off, how so and ever, I was completely wrong.

Make Me by Tamara Mataya was not too much and not too little but just right. It was truly a tale that demonstrates things are not always what they seem or how we may perceive them based on our own personal biases. Sloane Winters was 100% certain that her sister, Tessa, was in danger and needed to be saved from herself and the moral-less underworld of BDSM. So, acting as captain-save-a-sister, Sloane decides that the best way to help her sister is to partake in the offerings below the surface of “normal”. This is where she runs into Darko Aralica, who not only sends Sloane’s pulse a racing just by his mere presents, but changes her complete view of her own truth by giving her a personal introduction into the lifestyle of the underworld.


I digress. This novel is different. Tamara Mataya has told a tale that has been told in many different ways by so many others in a way that truly demonstrates her talent as an author. She is good. I mean really good at how she uses her words and weaves them together into a story that smolders and causes you to want to read and know more about the characters beyond the tom-kinkery.


Well done Tamara and I would definitely recommend to others, if they are look for not only a steamy read, but a well-crafted story, run out and read Make Me by Tamara Mataya.