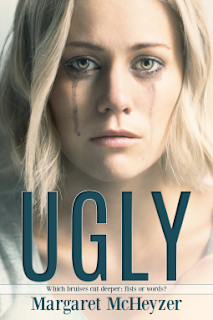 *This is a dark YA/NA stand-alone, full-length novel, which comes with a warning for triggers. Please do not read if abuse of any kind disturbs you.

My, my, my... This book was EVERYTHING! It gave you everything good, bad, and oh so ugly about the human condition. Domestic violence is all so very real for many. It  is a daily norm, a common occurrence, that for anyone who has never experienced a taste of it can not possibly understand the psychological warfare at play in these situations. Ugly by Margaret McHeyzer told the twisted ugly tale of domestic violence and how it transforms a person into thinking right is all wrong and how all the wrong is distorted into being right. This story is told form the point of view of the main character Lily as she goes from adolescent, to teen, and to an adult victim and eventual survivor of domestic violence.

This story was difficult to read at times. The story begins with a 12-year old Lily and the physical and verbal abuse her father is afflicting on her. As a teen Lily meets Trent, who appears to be her savior and his family takes her in and you quickly see that things are slightly off in this new environment. With Trent's mom having random umps and bruises and Trent's father treating his mother like she is a second-class citizen. But please, don't get me started on Trent's creepy uncle, who can't seem to keep his hands to himself and his mean-spirited aunts. There is no wonder why Trent is the way he is, because being abusive to women is like breathing in his family.

I found myself yelling at my reader, because I could not believe what Lily was going through and allowing herself to go through. I could not believe how someone could think so lowly of themselves and quite frankly, be so stupid. But Ms, McHeyzer set the scene perfectly for these things happen and continue to happen every day for some people. She narrated a tale that showed how people grow up in a bad situation and  escape to a sometimes even worst situation, as if their lives are no longer their own. She also showed how there are genuine people out there like Lily's best friend Shayne and her husband Liam, her bosses Peter and Dale, and Max, to help her start all over again. However, in this story, I think this support system of her helped her start to begin to live for the very first time in her life.

Overall, I would give this novel, 5-stars and recommend that you run out and read Ugly by, Margaret McHeyzer. It was well written and did a beautiful job of telling the dark, secretive tale of domestic violence that occur in various degrees and across familial units. This tale also depicts the vicious cycle of abuse and the silence that perpetuates such violence and leaves lasting effects through generations for perpetrators and survivors.