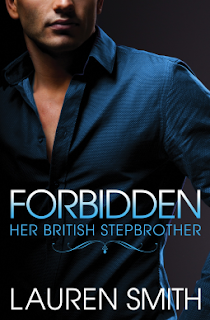 Kat has always been a good girl. She studies hard and never stays out too late. But when sitting in a pub on her birthday, she realizes she's a nineteen-year-old virgin who's never really lived. And she wants tonight to be the night that changes.

Then she sees him walk in. He's tall, dark, handsome, and straight out of her deepest fantasies. His voice makes her knees feel weak, and when he smiles, she imagines him doing wicked things to her in bed. From the look in his eyes, she knows he's imagining it too. So when he asks if he can walk her home, she hears herself whisper yes . . .

Oh my goodness... This was good! I enjoyed this from the beginning until the ending that came all too soon. However, before I continue, I just need explain that I am not on the Stepbrother romance bandwagon, so I was a tad hesitant to request this read from Netgalley. You see I've only read one other stepbrother novel which was Stepbrother Dearest by Penelope Ward and believed that was a rare find in this particular sub-genre. Thusly, I was quickly proven wrong when I read Forbidden by Lauren Smith.

Here we find Katherine “Kat” Roberts, an American college freshman, living with her father, who recently started working abroad in London. She is attending school in Cambridge and because she and her father had moved around so much, she had not formed any meaningful relationships up to this point of her life. So, since she will be in Cambridge for three years, she takes the plunge and try to forge some relationships with a bestie and a spare.

On the evening of her nineteenth birthday, the wind literally blows Tristan Kingsley into a tavern, where Kat, her bestie, and her spare are celebrating. His likeness is described with such detail that the words lifted right from the screen of my reader and transformed into what can be best described as hotness. From her first glimpse at this specimen, it was clear this chick didn't stand a chance. Tristan was a grad student at Cambridge, who was used to getting who he wanted, however he wanted, but when it came to Kat, he definitely had his work cut out for him. At one point I didn’t think he was going to bounce back from the rejection, but Kat forgave him and they were heading, yet again, in the right direction. He wooed her and she fell willingly, but apparently he wasn’t the only one wooing somebody. Apparently, Kat’s father was doing some wooing of his own, when he called her to say, that he had met someone and he and Kat would be spending the upcoming holidays with his new lady love.

I digress. Overall, this was a good and quick read that was good from the beginning to the end, as well as, being well-paced and written. The characters were all interesting and the story had some interesting twists and turns with a cliff hanger that will have you anxiously awaiting the second book of this series, Seduction. I can easily give this novel 5-stars and recommend that you add this to your “want to read” list on Goodreads and run out and read Forbidden by Lauren Smith on January 12,
2016.

Series: Her British Stepbrother Series #1
Other Books in Series: Seduction #2 and Climax #3
Published by: Forever (Grand Central Publishing) Forever Yours
Publication Date: January 12, 2016
Source: NetGalley
Posted by Run and Read That... at 6:25 PM