London is Leah Watson’s fresh start. When she secures the perfect internship during her study abroad semester, with an infamous celebrity public relations firm, she is determined to forge her own path - one that is nothing like her life back in Oklahoma. That plan is tested when British football’s bad boy, Killian Ramsey, decides that she's the one he wants and he's playing for keeps.

Will she put her future on hold - again - for the type of man she swore she'd stay away from?

Killian is one bloody good football player. After a tragedy shattered his entire world, the cocky and arrogant face he puts on for the media is a complete lie. When he meets Leah, his heart starts to beat for the first time in years. But when the feelings get too real, his perfectly constructed facade starts to slip.

Will he risk it all to be with her - taking whatever penalties are thrown his way - or will he play it safe? 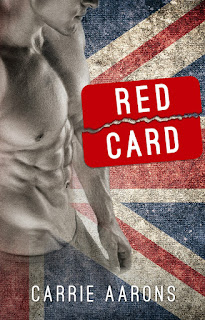 Trying to dash off to find the British Prince of Moodiness proves difficult in the six-inch stilettos the stylist had strapped onto my feet. I didn't wear clothing like this. I was the Oklahoma girl­next­door, cute and pretty in my sundresses and boots. I didn't do skintight, short or heeled. I could hear the snickers of the PR handlers around me as I stumbled like a baby calf off of the carpet in search of my responsibility.

Turning down the block and moving away from the mayhem, I spotted a tall figure in the shadows. I'd read enough about Jack the Ripper before coming over here to be spooked, but then I saw the shine of a metal flask being raised to the lips, and I could only take one guess as to who that was.

I marched up, as best as I could in the shoes. "You need to come back and walk the red carpet."
Killian's sky­blue eyes twinkled with sly amusement and barely restrained anger. "Oh, and you're going to make me, huh America's Sweetheart?"

The smell of what I'm sure was overly­ expensive whiskey blew across my face as he exhaled. He pretended to give an air of nonchalance, but I could read his body language better than he thought I could. He was so coiled and tense, he gave a cobra ready to strike a run for its money. Rage and sorrow poured off of him in waves, blanketing the dark side street in misery so abundant that I could feel it down to my bones. And something else. I don't know why it struck me, perhaps because the emotion was running through my veins as well. But this man...he was lonely.

"You're cheeky, I like that." He raised the flask in a salute to me and tilted his head back as the amber liquid disappeared into that appealing mouth. Damn it. This bad boy with a bad attitude was not going to ruin my career or my time here. I was done letting people decide the future for me, sweeping me along in the current just because I let them.


I knocked the flask straight out of his hand, sending little droplets of whiskey landing on both of us.
"Listen you jackass! I don't know who you are. In fact, I don't care if you're the Prime Minister of this country! This job, I really need it. I'm taking this shot and succeeding at it if it means I have to put my blood, sweat and tears into it. And some London bad boy parading his pissed off attitude around for the world to see is not going to stop me! So button your jacket, plaster a smile on, and get on that carpet!"

My breathing was ragged, all of the energy I'd saved up to get through the event suddenly spent. Jetlag, homesickness and heartbreak were taking over, and I could feel the pull of all three from the inside out.
The leer on Killian's face only proved that my tirade was all for nothing.

And then he moved. It was a blur of motion and speed before my back was against a brick wall. He'd pinned me, like a wolf circling in on their prey. Nervous tremors washed over my flesh, and I could hear the roaring in my ears. I was half­ afraid he would actually rip my throat out for speaking to him that way. The other half of me was too incredibly aroused to care.

"I am bad. But I'm not a boy, I'm a man. Have you ever been with a man, little lamb?" He chuckled darkly, leaning his entire form into me and pinning my hips with his hands. "No, I don't think you have."

When I first ran across this is title somewhere on social media, I knew immediately that I wanted to read Red Card by Carrie Aarons. There was something about the synopsis that lured me to its pages and a must say, I was not disappointed in the least. Red Card told us a tale of Leah Watson from Oklahoma, who planned her life around her high school sweetheart, who just so happens to be a star athlete. Leah had gone to same college as "Bae", choosing a major just to get  a degree, just to be close to him. Her life revolved around his every move, while she neglected her own, until he decided he didn't want to be with her anymore during their senior year. This left her with three wasted years of being the doting and supportive girlfriend and no clue of what to do with herself or her future. So with her future literally on the line, Leah found herself scrambling to make the best of her last year of college with that best just so happened to take her across the pond to London, where she nabbed an exciting PR internship thanks to her aunt.

Now, what was awaiting her across the pond was Killian Ramsey, an aging professional soccer player with as much money, fame, attitude, as he had panty-dropping good looks. He was everything, jerk included, with a past that left him vulnerable for massive temper tantrums and nightmares that controlled his life in all the wrong ways and at all the wrong moments. However, when Killian meets Leah, he sees a challenge and a challenge is what she gave as she was just trying to hold her life together. But after a few secrets are revealed and series of break-ups and make-ups everything works out for these two and it is fair to say, since this is a romance novel and all, that there is a happily every after that was well deserved. But the journey to get there was not an easy one to say the least.

Overall, I really enjoyed reading this story. It wasn't too long or too short, but it did seem to rush to a halt and then to an epilogue. I mean it was still good, but I just felt that something was missing, maybe I was wanting something more with Leah's story, but hey, that could just be me. I digress. I am going to give this read 4-stars and recommend that to you jog and read Red Card by Carrie Aarons.

They say those who can't do, teach. Well, Carrie has no hand-eye coordination, and her idea of romance is a Netflix marathon complete with Thai food. So, she writes sports romance novels instead.

Beginning her writing career as a journalist, Carrie wrote about real-life crime and scandal before turning to the fantasy world of fiction. She lives with her husband in an apartment they are constantly outgrowing. 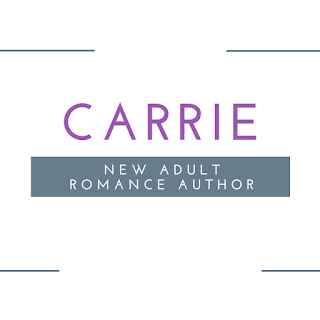