I Wish you Were Mine by: Lauren Layne 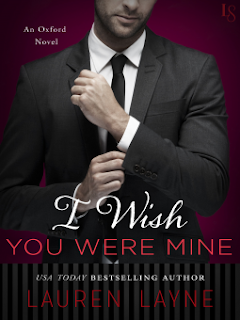 
A year ago, Jackson Burke was married to the love of his life and playing quarterback for the Texas Redhawks. Now he's retired, courtesy of the car accident that ruined his career—and single, after a nasty scandal torpedoed his marriage. Just as he's starting to get used to his new life as a health and fitness columnist for Oxford magazine, his unpredictable ex shows up on his doorstep in Manhattan. Jackson should be thrilled. But he can't stop thinking about the one person who's always been there for him, the one girl he could never have: her younger sister.

Mollie Carrington can't say no to Madison. After all, her older sister practically raised her. So when Madison begs for help in winning her ex-husband back, Mollie's just glad she got over her own crush on Jackson ages ago—or so she thought. Because as Mollie reconnects with Jackson, she quickly forgets all her reasons to stay loyal to her sister. Tempted by Jackson's mellow drawl and cowboy good looks, Mollie is sick and tired of coming in second place. But she can't win if she doesn't play the game.


I Wish You Were Mine by Lauren Layne is a romance novel that tells the tale of Jackson Burke, a retired football player that has to learn to live his life with any possibility of playing football again and with his wife leaving him for that exact reason. In the aftermath of a career ending injury and relocating to New York, Jackson tries to start a new life as a writer for Oxford Magazine. However, he gives little effort at really trying to start over because is heart is with his old life back in Texas that included football.

Meanwhile in New York, Mollie, Jackson’s sister-in-law who has loved him since the day she set her eyes on him, is ready to face Jackson and show him her new look. As they are meeting and discussing life and such Jackson makes an offer that Mollie can’t refuse considering her current situations. With all things considered everything seemed to be working out with their new arrangement, until Jackson offers to hook Mollie up with one of his co-workers. This was just the spark Jackson needed to realize that not only did he and Molly have two very different perceptions of Madison the ex-wife and the big sister, but that they have always been there for one another all along.

Overall, I thought this was a pretty good story that effortless told a complicated story in a simple yet captivating way. I enjoyed reading the pace of the progression of their relationship and how the thoughts and feelings of the two main characters were relatable in some ways.  The insecurities, the uncertainties, the fear, the joy and excitement, all of it was conveyed nicely in this tale.


I digress. I am giving this one 4-stars. Why? You may ask… because I wasn’t aware that this title was Book Two of the Oxford Series, so I thought it was odd how the spotlight landed on another couple that worked at Oxford Magazine. Anywho, I would recommend that you jog on over to read I Wish You Were Mine by Lauren Layne.
Posted by Run and Read That... at 10:49 AM