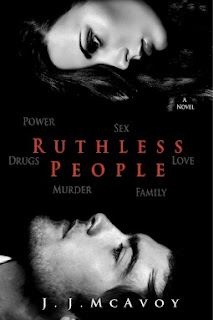 I started reading this series over a year ago. I mean, I had requested book two via NetGalley and upon realizing it was a second book in a series I reached out to the author via Twitter to see if it was necessary to read book one first. Her response was not really or something to that affect, so it sat there. But then one day, another book by this same author popped up on Netgalley. The title of the book was Childstar by J.J. McAvoy and I immediately requested this one.  Although, I was intrigued by The Untouchables of the Ruthless People Series, I was turned away by some of the reviews I had been running across.

Anywho, I read Childstar. It was good, but there was something about these two characters, Melony and Liam who popped up in this series and forced me to pay them some attention. I had never read a book that the supporting characters pulled at me so much that I had to know who they were. Melony and Liam become bigger than the main characters in Childstar and thus began my love affair with Ruthless People by J.J. McAvoy.

Immediately after reading Childstar and completing the review, I purchased the first book in the Ruthless People series by the same title. From the beginning to the end the story was phenomenal! There was so much action, crime, corruption, loyalty, and love in this story that it was bursting from my Kindle app. The Callahans were so bad and yet so good all at the same time.

Ruthless people told the beginning of a new era for the Irish crime family, the Callahans. With Cedric stepping down as the Ceann na Conairte and Liam taking his rightful seat on the thrown. And because every king needs a queen Melody Giovanni had been chosen, handpicked, and groomed to not only head the Italian mafia but also to sit at his side. Each of them grew up knowing that this day would come and they studied and prepared all their lives to be the head of the Irish-Italian mafia.

However, Liam could not have been prepared for the strength and fortitude that Melody possessed. She was beautiful, smart, and ruthless and was never afraid to fire her gun for which Liam and his brother lived to tell that tale.  Conversely, Melody was not prepared for Liam’s charm and Hollywood good-likes to sweep her off her feet. She was also not ready for the outpouring of love the Callahan clan had to offer.

They fought each other, they fought anyone that thought about attacking them or dared an attempt, but they were not ready for the attack in their own home that nearly ripped Melody apart and forever changed their family.

I digress. This book was good! There were some grammar checks that annoyed me, but this was just an overall good story that captivated me until the very end. I personally was not prepared for this story. You see, I don’t usually read crime or mafia style books, but I persevered and continued to I swipe left and even sometime right because I just couldn’t believe what I was reading and had to read it again. Overall, I feel I cannot give this read anything less than 5-stars and recommend that you run and read Ruthless People by J.J. McAvoy.

This is one book that I must say you have to read for yourself, especially if you are a fan of this genre.
Posted by Run and Read That... at 11:20 AM