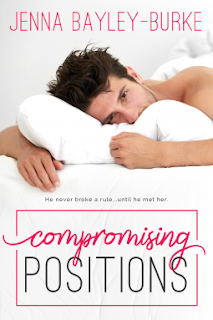 When fitness empire CEO David Strong agrees to help teach a yoga class for couples based on poses in The Kama Sutra, he’s put in one compromising position after another. Especially since the instructor is his best friend’s little sister-in-law, doesn’t have a lot of experience with men, and is totally off-limits. She’s everything David’s never wanted. So he can’t understand why he suddenly needs her so much.

Sophie DelFino has fantasized about David for over a decade, but he has a type, and she’s far from it. He’s also got all sorts of rules and reasons why they shouldn’t be together. Good thing Sophie is all about bending the rules.

This was a good read, because you had the alpha male in David Strong with enough rules that would ward off any woman with dreams of a happy home with a white picket fence, 2.5 kids and a dog. Settling down was not in the cards for him, but a one night stand, he was all for that. In this novel you also had a strong heroine in Sophie DelFino. Despite some slight insecurities, she knew what she wanted and how she wanted to be treated. And what she wanted was David, on her terms.

But as fate would have it Sophie’s needy sister, Daphne, needed her yet again, but this time to teach a karma sutra yoga class with Craig the obnoxious brother in law. So where does the good fortune come in? Well instead of Craig, David shows up in his place. You see Sophie’s had a crush on David since her sister’s wedding, but her sister threw some serious shade his way by breaking all kinds of “cool kid” codes by telling her about all of his dirt. Needless to say, Sophie or David were not prepared for the class or the way their lives would transform from the first class onward.

Now I liked this story. It was nicely written in a way that was not too raunchy and had unexpected elements that made it just right. However, there was a feeling that some issues were left unresolved and streams of thought left incomplete. Like why didn't Sophie ever tell her sister the dark family secret and why was Daphne too fragile to ever know and how inappropriate workplace behavior was remedied by marrying the person behaving badly? And why wasn't Craig ever called out for being an opportunistic jerk? Man, I didn’t like him, no matter how hard Ms. Bayley-Burke tried to make him likeable. And that sister, Daphne… HUMPH!

I digress. I would easily give this read 3.5-stars and recommend that you jog on out and read Compromising Positions by Jenna Bayley-Burke.