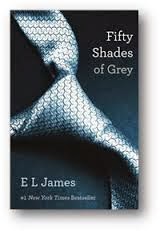 After much resistance to join the masses of women around the world who held the dark cover of the  Fifty Shades trilogy written by E.L. James to their faces, I caved. I told myself as I listened to the casting scandal on an entertainment news show that I would simply download a sample using the Barnes & Noble NOOK app on my new Samsung Galaxy 10.1. I had already made up in my mind that this story was a hot steamy mess that could not be worth all of the excitement that had warranted a worldwide phenomenon where women of all walks of life were now openly talking about sex. So, on Sunday, October 13, 2013, I did it. I downloaded a sample and about 15 minutes later I had purchased an electronic copy of Fifty Shades of Grey.  I know what you are thinking and you are right but slightly wrong.  Although the book has been out since 2011, there are some folks out there who have yet to take the plunge, however, I hope that my unique review critique will allow some of those other folks to take the dare and allow their curiosity to take over and they will step into the Grey side.

Surprisingly what intrigued me the most about this book was the build-up and underneath the kinkiness was actually a a pretty decent story. For those of you who have only heard about the steamy sex scenes, Christian Grey, the "hero" of the series is all kinds of cooky. Like dude REALLY?!?! But before I get on to his tom foolery, let me tell you about Ana, ...WAIT! Before I tell you about Ana, did I mention that this trilogy began as a fanfare to the popular Twilight series. So, if you liked Twilight, even just a little bit... you will more than likely LO-OVE Fifty Shades.

Now, let me tell you about Ana. Anatassia Steele, the heroine in the book, is a graduating student at Washington State University in Vancouver, Washington. As a favor for her best friend and roommate she agrees to interview Christian Grey, who is a young wealthy benefactor of research and STUFF at their college. He is also scheduled to be the commencement speaker during their upcoming graduation. So Ana, who is just plain ole everyday awkward interviews this Mr. Grey and as you guessed it, one thing leads to another and in a matter of 3 weeks or less Ana has lost her virginity, has been gifted with a series of expensive gifts including an Audi A4, introduced to BDSM, has fallen head over heels in love with this Christian Grey, and has yet to even touch this fool. CREEPY!!!

So now my review, I loved the story!!! Yes, as I mentioned their is actually a story here. Sure, its not written the absolute best, I mean some parts are just plain ole everyday weird. Like you can absolutely tell that the author is not American and slightly out of her element age wise. Bascially, I have not talked to every American in this country but sheesh, I am nearly 93.7% certain that two 20-something year olds would not have been "getting it in" with the ethereal sounds of Spem in Alium as their accompaniment. I mean really?!?! Come on Ms. James, what about some 12 Play by R. Kelly or Tourniquet by Marilyn Manson or Cockiness by Rihanna or Posession by Sarah McLachlin or even some good ole Marvin Gaye or even anything that just fits the kinkery that was commencing? Most of the musical references, were just like No MAAM, absolutely not!!! I absolutely love Pachelbel's Cannon in D, how so and ever, I don't just listen to that riding around in ANY car.

Now back to the story I fell in love with. Christian Grey is a very complex character that I feel was developed quite nicely that pulls you in to read on to the next book. He's adopted, has control issues, nightmares, a therapist, and did I mention he doesn't like to be touched. While, Ana is clumsy, talks in her sleep, follows directions (for the most part), and has nerve issues thanks to Christian Grey. There is so much missing from who Ana is character-wise but I guess its because the book isn't called Fifty Shades of Steele. Anywho, I digress. The book has a lot of passion and sensuality and kinkiness to hold your attention and if you are creative enough and lucky enough to have a willing partner, it provides you with a how to guide to getting it popping in the boudoir.  Overall, I LOVE FIFTY and all his shenanigans. Let me continue on to book two Fifty Shades Darker. Laters.
Posted by Run and Read That... at 4:45 PM