I received a copy of this novel courtesy of Random House Publishing Group - Loveswept by way of Netgalley.

I must say that I was pleasantly surprised by this inaugural novel of the Frost Series by Tracy Wolff. The main characters are Chloe Girard, a college senior who is interning at Frost Industries and Ethan Frost, the charismatic CEO of the whole operation. 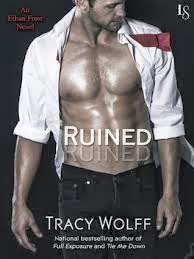 Well, Chloe meets Ethan on her first day on the job during a colorful exchange about fruits and berries. Chloe has no idea that she is interacting with The Man himself, but instantly feels something that she had told herself she would never feel. So, you can say the chemistry between these two is instantaneous. However, I was turned off by all of the internal dialogue inside of Chloe’s head. Her thoughts were at times insightful and at time annoying and redundant that became a drag to read.

On the other hand, Ethan is as dreamy as any romantical story’s hero and seemed to be an overall awesome dude. These two were great once they started moving in the same direction…in the same car… heading to the same destination. I actually started to enjoy the story more when Chloe got out of her head and actually started using her words a little more. But just as there relationship was soaring high in the blue skies it was yanked down by an ACME anchor. And just when you thought they had recovered and you might just get a happily ever after, low and behold the novel just stops… like it ends. Mrs. Wolff built me up just to leave dangling from Mount How-the-heck-are-you- going-to-me-like-this.