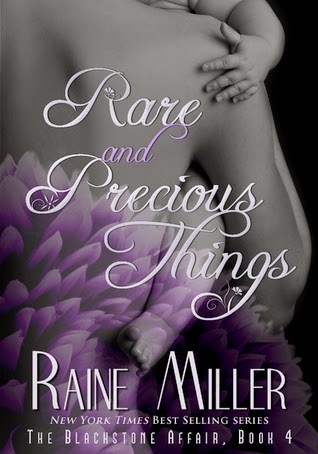 After completing book 4 of the Blackstone Affair Series by Raine Miller, I needed a few days to process everything. Rare and Precious Things answered a lot of questions that had been lingering since the beginning of the series. This installment also brought Ethan & Brynne face to face with some truths that allowed them to begin to completely heal from their torturous pasts.

The novel began with the Ethan & Brynne's weekend wedding celebration and the surprise of Ethan purchasing Stonewell Court for Brynne as a wedding gift. Ethan is trying to manage his nightmares  and fears that he will cause harm to Brynne either unconsciously in his sleep or during one of his f*ck the pain away sessions. He worries about this incessantly.

Brynne on the other hand is adjusting to being Ethan's wife and her ever changing body that comes with pregnancy. Brynne, is having to now deal with some of Ethan's past sexual exploits as she becomes increasingly insecure and questions him about nearly every woman they encounter. But all that was bound to happen.

What was not expected in this installment, was Brynne's mother suggesting that she make nice with the man that Brynne believed assaulted her and was the cause of all of her nightmares. To make matters worse the Vice-Presidential candidate contacts Ethan to aid in this P.R. stunt to avoid scandal if news ever got out about his son and Brynne. Reluctantly, they agree and the truth is finally learned about the night that has haunted Brynne for far to many years and it is definitely not what you would have expected. Neither is the I-know-not-what emotion that you feel for a person you never would have thought is certainly not expected.

Overall, this was a nice ending to the Blackstone Affair series. There were weddings, a birth, a secret affair, therapy, a new car, a broken leg and a dog. So there was a little of everything that make for a much sought after happily ever after for these two.

Please be prepared to read on because the teaser at the end of this book led me straight into reading The Passion of Darius which is also referenced in several places in Rare and Precious Things.
Posted by Run and Read That... at 2:15 PM