Point of Submission by: Remy Landon

As I was reading Point of Submission by Remy Landon, I was reminded of the curious and intoxicating game of dating. You know the game where the girl, Cassandra Larson, meets the boy, Carlo Leone, and where the girl plays hard to get and the guy is relentless in his pursuit but yet has ulterior motives hidden behind truckloads of charm and smoldering good looks. Yep, that's the game I was reminded of here in the novel.  However, whichever role these two took on to play this game and regardless of what they initially thought about themselves, both Cassandra and Carlo began a free fall into the land of “I like you more than I like you”. 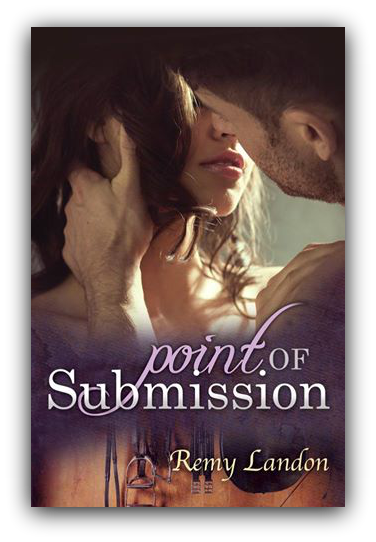 For Cassandra, a waitress and stable hand, men are untrustworthy and cheaters. She is still trying to overcome the betrayal of her father and her ex-boyfriend. While on the other hand Carlo is a CEO of his family’s business and is adored by all, his employees, his sister, and every breathing woman that catches a glimpse of him. However, there is something a little off about him besides the game he and his best homie plays to manipulate women to submit to them. That includes random nightmares and words that go unspoken and awkward conversations that seem to just stop when talking about his love life. Carlo has set his eyes on Cassandra as the next contestant of his twisted game and all things seem to be going smoothly according to all of his twisted and infinite “man knowledge” until Cassandra unknowingly began to thaw the ice box in his chest where his heart use to be as he begins develop feelings and a conscious.

In this novel, there was a lot of stable talk, flirtatious banter, and tom-sneakery to draw you in and hold your attention to the very end. And speaking of the end…Just as the novel was making yet another climactic climb, Ms. Landon just left me lost and stranded somewhere between the Bermuda Triangle and Atlantis beneath the Atlantic Ocean. I was so ready to swipe to the next page of my reader, and had just sat up a little straighter when it just ended. UN.FREAKING.BELIEVABLE!!!

I digress. This is definitely a pretty good read with good supporting characters without too much kink-foolery but yet there were enough shenanigans to take notice and get you over the hump… you know if you like that sort of thing *wink*. I am definitely looking forward to read the next in this series because I am so very curious as to what will happen next between Cassandra and Carlo.

As a child, Remy was an avid reader and writer, bringing stacks of books everywhere she went and scribbling stories in a thick spiral notebook.

She heard somewhere that you should have a career based on what you loved to do when you were 10, and she would love nothing more than to follow that advice.