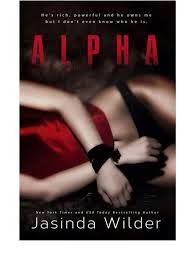 Soooooooooo...Alpha by Jasinda Wilder pulled me in because of the intriguing plot where Kyrie, a young struggling college student who is trying to take care of herself, her younger brother, her mentally unstable mother, and herself. She was juggling all of her responsibilities while having to rob Peter to pay Paul when she was suddenly fired from her job. Mysteriously, checks began to arrive made out to her in the amount of $10,000 each. For 12 months these checks arrived until that faithful day, a strange man comes to "collect" her. And by collecting her, I mean a huge burly dude pops up to take her to the unknown benefactor who we learn is a wealthy business tycoon named Valentine.

Now I was a bit excited about this read... wait a minute, am I the only one that thinks Valentine is an odd name for a big, bad, sexy, Alpha male? Sorry about that interruption but that name bothered me for at least a chapter or two after the big reveal...

I digress. Early into this novel I was met with an impasse. It was difficult for me to move on. The story was very slow and nearly boring and by the time she arrived to meet her benefactor, I was almost disinterested in who he was and thought he was rather silly with all his stupid rules. There was absolutely nothing I liked about him. But I continued to read on when something happened. The storyline between Kyrie and Valentine did a complete 180-degree turn for the best. It actually got pretty darn good.

Although the book had a slow start for me I ended up liking it. I even began to like the characters and a few more pieces of the plot and wanted to read more. There were some cutesy parts and some steamy parts that could leave you all warm and bothered. I even wanted to learn more about this Valentine but then, there was this twist and turn of the plot that left me adrift much like Kyrie and I was again searching for something. Hopefully, that something will be discovered in the next book of this series entitled Beta with a release date to be announced.
Posted by Run and Read That... at 12:46 PM