Tears of Tess by: Pepper Winters 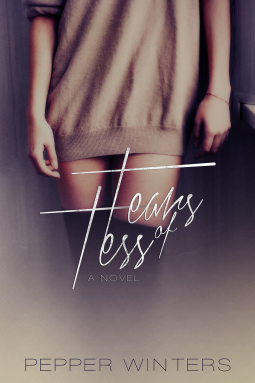 Tess Snow has everything she ever wanted: one more semester before a career in property development, a loving boyfriend, and a future dazzling bright with possibility.

For their two year anniversary, Brax surprises Tess with a romantic trip to Mexico. Sandy beaches, delicious cocktails, and soul-connecting sex set the mood for a wonderful holiday. With a full heart, and looking forward to a passion filled week, Tess is on top of the world.


But lusty paradise is shattered.

Kidnapped. Drugged. Stolen. Tess is forced into a world full of darkness and terror.

Captive and alone with no savior, no lover, no faith, no future, Tess evolves from terrified girl to fierce fighter. But no matter her strength, it can't save her from the horror of being sold.

Can Brax find Tess before she's broken and ruined, or will Tess's new owner change her life forever?

A New Adult Dark Contemporary Romance, not suitable for people sensitive to grief, slavery, and hard to read subjects. A story about finding love in the strangest of places, a will of iron that grows from necessity, and forgiveness that may not be enough

Well, well, well, it took me a really long time for me to even want to read this book. The warnings was written all over its description and within most of the other reviews I had read. There were clues about the drama that lied on the pages of this book between its front and back covers. But I ignored them all and decided to take the plunge and read it for myself.


So without further ado...

Tess was a college student with emotional baggage delivered by her parents and was in a “stable” relationship with her boyfriend Brax Cliffingstone. Can I pause here to side-eye the name Brax Cliffingstone…? Anywho, Brax was everything any girl could ask for in a man, however, according to Tess, he lacked the necessary intermediate to advance skills in the boudoir. Tess has somehow managed to tolerate his mediocre skills but she is longing for the chance to be more “adventurous.”


With a planned Mexican vacation, Tess and Brax’s life forever changes and the madness ensues. Tess is taken and when she began to fear her life couldn’t get any more twisted, the mysterious “Q” enters into her world and she doesn’t know what to do. Not quite knowing, understanding, or trusting her fate as an enslave, Tess finds that something she has been lacking in her life exposed and everything she thought was her new reality was all lies and deceit. From her hating “Q” to her craving his touch. From her wanting to go back to Australia to her begging “Q” to let her stay when he tells her to leave. Is this a bad case of the Stockholm Syndrome or could it be something… else?


I cannot even imagine enduring the atrocities that Tess endured. I am not sure I would have survived, but with the support and awkward nurturing from “Q”, Tess does. She survives and finds the… the ummm…I suppose what I’m trying to say is that she survived.


I digress. I never completely connected with Tess’ character even though her ordeal was horrific and unimaginable.  And even though “Q” turns out to be somewhat of a hero in his own special way, I never connected with his character either. I believe both characters seemed to lack something. However, through all that is bleak, dark, and tainted in the book, there is a haze, a glimmer, if you will, of something that resembles an adequate ending for Tess and “Q”.


I am not sure about this one. I mean didn't dislike it. It is definitely not for everybody and although there are two additional books in this series I am not running, jogging, skipping or walking to read either of them. But if you want to read a dark… an oh so very dark tale, please go right ahead and pick this one up.


Now back to my regularly scheduled Happily-Ever-Afters.
A complimentary copy was provided via Netgalley in exchange for a honest review.