Alpha Part One by: Abby Weeks 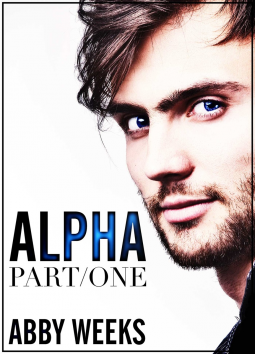 Who is Holden West?
I'm not who you think I am.
Looks can be deceiving.
I'm good-looking, but I'm not a ladies man.
I'm beyond wealthy, but no one knows it.
I'm confident, but my heart has been broken.

Find out who Holden West really is through the eyes of Lucy Mayfair, the struggling waitress who works at his favorite diner. When she first meets Holden, all she sees is a tough, rugged auto mechanic who seems to carry a certain sadness wherever he goes. What she soon finds out is that there is more to Holden than she ever would have guessed.

Well now... What do we have here? I'll tell you what, a set-up is before me for what could potentially be a very good storyline in the first installment of Alpha by Abby Weeks. Even though I was hoping for more, I was intrigued enough by what I did read to want to read more about Lucy, Holden, Jimmy, and Jefferson, as well as, Lucy's family.

I digress. Why am I digressing so soon in this review after I haven't said much? Well because I was not expecting the read to end so soon. Firstly, I loved the characterization and the descriptive way in which Alpha was written. Secondly, I would have preferred to have continued reading and not wait until... until... until whenever the next installment will be available. And last but not least, the third and final reason is the potential, that Ms. Weeks will not let me down on this one and keep the same spirit and tone of what has already been written in the future installment(s).

I know. I know. Some of you will read this installment and think where's the rest of it or you may blog or review in exasperation saying that nothing happened and yaddah, yaddah, yaddah. But let me tell you, I love a good story. I thrive on the build up and that is exactly what Abby Weeks did with Part One of Alpha. She has built these characters up and I do hope that she will not let them fall flat on a not so great storyline. So, I would recommend, that you take your mark and get set because I am VERY hopeful that the run to read this one will be well worth it.

A complimentary copy was provided via Netgalley in exchange for a honest review.
Posted by Run and Read That... at 5:30 PM