Science of Attraction by: Verity Jacobs 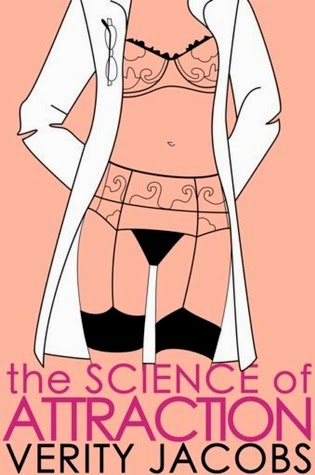 Kate Ramsey is at the top of her game.


She’s the hot new recruit at the most prestigious research institute in Germany, and she’s determined to live up to the hype — even if it means working day and night. Stress relief comes in the form of a no-nonsense affair with her neighbor, who also happens to be the director of the institute. Who says sex should be anything more than a contract between two people who have other things on their mind?

So when Tom Baker saunters into her life, Kate is understandably upset to see this well-oiled machine splutter and seize. Tom is young and smart, and far too pretty for his own good. Kate can’t help but be drawn to him, even if giving in to the attraction would mean risking everything she’s worked for.


The Science of Attraction by Verity Jacobs was a smart, sexy, and fun read. I enjoyed from the beginning.

I had mixed feelings as I began reading The Science of Attraction by Verity Jacobs. I mean I have quite a few friends who have obtained the PhD in some science or another. They have and are still conducting research in their various areas. However, each of them have a weird quirky sense of humor and plain ole everyday weird tendencies. I am forever grateful I met them before they got too awkward and a can appreciate their beautiful minds. Nevertheless, I find their research admirable but unless they use an ordinary buzzword, I have no idea what they are talking about when they attempt to explain their bodies of work.


So this leads me back to the review of The Science of Attraction. I could relate to the premise but I was not sure how entertaining or amusing this novel could be. Therefore, I was pleasantly surprised from the start. This was just a good novel. It was one of the smartest and sexiest reads to date.  Kate Ramsey was smart and knew what she wanted and how to make things happen. She was strong and took charge in a field dominated by men but found herself in a deadened “arrangement” with the director of world-renowned research facility, Rob-“no last name needed”. It was clear and at times unclear the extent of their relationship, but none of that matters because in salters Tom “who can get it” Baker, from the longhorn state of Texas.


Kate is not the only one smitten at first site for Tom has had his lusty eyes on her ever since he saw her speak at a conference in California. Kate is none-the-wiser and pretends to carry on business as usual until she can’t any longer while they are away at a conference. One thing led to another and then another and badda-bing, badda-bang, badda-boom you have Kate creeping around with Tom and cheating on her “cuddy buddy”, who she is trying to “break-up” with, Rob.


I digress. This was a really good story that maintained a steady pace throughout the novel. All of the characters were well written and likeable, well, all of them, except for the diabolical Rob. I am definitely recommending that you run out and read The Science of Attraction by Verity Jacobs, because it will definitely cause you to look at research scientist in a different kind of way.


A complimentary copy was provide by the author in exchange for an honest review.
Posted by Run and Read That... at 12:54 PM