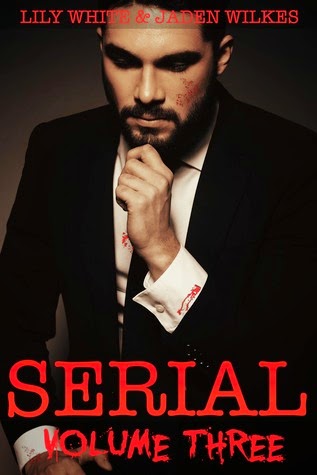 With Donovan closing in, his feelings growing for Ronnie, and the sudden realization where their paths crossed before, Jude's composure might be cracking.

Will Donovan get the CK? Will Jude make a fatal mistake? Will Patty make it out alive? And will we ever figure out where Ronnie and Jude met before?

Join us for Volume three in a bold, exciting, dark new adventure from Lily White and Jaden Wilkes.

Can anyone hope to find their happily ever after when a serial killer falls in love?

WHAT?!?!??!?! I have been waiting for Serial Volume Three for months now and I must say I was not disappointed. This story is so twisted and oh so good with so many crazies until you don’t even know who is good or bad anymore at this point.


It is so  difficult to tell you about this volume without including spoilers. But I will say is that Will Donovan falls to a new low and Pet is not who she seems or who anybody, including herself believes she is. While ____ is even more demented than anyone could have imagined. He literally woke up like that and flawless is not word to describe that fool.


But that ending though?!?!?!? The ending was brilliant and the descriptive way the authors concluded this volume darn near deserves a round of applause.


I digress. I can’t wait until the volume. I only hope that Lily and Jaden don’t make us wait too long. So, my recommendation would be to run out and read Serial Volumes One, Two, and definitely Three.