The Catching Kind by: Caitie Quinn 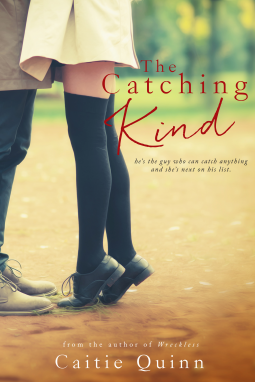 Hailey Tate thought she was worth more than a straight flush.

When camera-shy author Hailey Tate’s agent loses a bet and brokers a deal, it leaves Hailey in the last place she wants to be: backed into the corner of Publicity and Paparazzi. Now, thanks to her girl-next-door image and role as pretend girlfriend to a womanizing shortstop, she's getting the attention she always managed to avoid.

Connor Ryan is not only America’s Sexiest Athlete, he’s also the current Bad Boy of Baseball. But when he goes a base too far, management wants to bench him…permanently. One thing he never counted on? Falling for his sweet, fake girlfriend. He’s the guy who can catch anything and now she’s next on his list.

I loved this novel. It was so clever and sweet, I enjoyed from the beginning to the end. This was truly a novel that demonstrated that you could never judge a book by its cover as Connor and Hailey saw past the stereotype inflicted upon them, not only by others but by themselves.

I must admit that I did not like Conner at first. He wasn’t mean but just rude. Conversely, Hailey perpetuated her given stereotype daily and even though she could have done better she just chose not to do so. She was really a “take me as I am” kind of girl. However, once the two of them got together, regardless of the circumstances, you saw the magic happening and unfold as you turned the page.

I digress. This book was good and devoid of any pearl clutching kink-foolery. The imagery was spot on and the writing and characterization was great. If I had to tell you something that was negative about this novel it would be I honestly did not want it to end. I mean there wasn’t a cliff hanger but something was definitely missing or needed or maybe just wanted at the conclusion of their story.


So, if you want to read a nice sweet romance, that is so sweet it may leave you with a toothache, that you could just imagine on the Hallmark network, you need to run on over and read The Catching Kind by Caitie Quinn.
A complimentary copy was provided via Netgalley in exchange for an honest review.