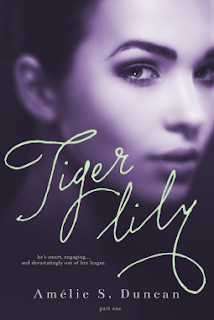 Lily Salomé has encountered more challenges than the average twenty-four year old. After a horrendous crash killed her parents, an abusive relationship was all she needed to turn her broken heart to stone. So when Lily's boss comes to her with a challenge most girls would balk at, she knows there isn't much left in this world to be afraid of.

The target: Jonas Crane, a brooding business mogul. Dark, dangerous and mouthwatering, Crane has written a book about life in the fast lane and with the recent publicity, Lily's boss wants the rights. Problem is, Crane won't return a phone call, let alone agree to a meeting. But if a pretty publishing assistant happens to run into him at the Waldorf, with a business card and a smile...what could go wrong?

A lot, it seems. Lily thinks she's going to meet a rich jerk, or worse, a playboy, but the truth is way more challenging. Jonas Crane is smart, engaging...and devastatingly out of her league.

How can a character be so weak and yet so strong all at the same time? That’s exactly how Lily Salome was in Part One of Tiger Lily by Amelie S. Duncan. Lily had suffered the pain and loss of losing both parents at the same time and an ex- fiancé, Declan, who was a manipulative and abusive prick.  Not that the loss of her parents and an ex from hell, Lily has a boss, who moonlights as a friend, that sends her on an assignment to meet the charming and elusive Jonas Crane.


Although there is an instant spark of chemistry, their love is not as quick to start. Jonas, is recently divorced with a teenage son and is based in Texas, while Lily works in New York and lives in New Jersey. With Jonas not looking to dive right back into a serious relationship, he and Lily have a mutual respect and curiosity for each other, the relationship that is proposed, seems convenient
enough until that spark starts to burning.


Jonas is a kind man and remains close friends with his ex-wife, Dani. He is also straight forward and will do whatever it is within his power to protect those closest to him, including Lily, if only she would allow him to do so. Conversely, Lily just wants to be loved and shown affection, yet she is afraid of that at the same time. So, when tragedy strikes at the hand of her ridiculously grimy ex, Declan, Lily set out on a course of self-sabotage that she believes will protect Jonas but breaks her even further.


I was pleasantly surprised by Tiger Lily Part One. It was a pretty good and Jonas really redefined the stereotypical billionaire, alpha-man role, because he just had this ‘je ne sais quoi’ that left me singing  the song ‘What A Man’ by Salt-n-Pepa circa 1993.


I digress. Overall I really liked this novel and would give it 4-stars and would recommend that you jog on over and read Tiger Lily Book One by Amelie S. Duncan.