A Million Miles Away by: Lara Avery 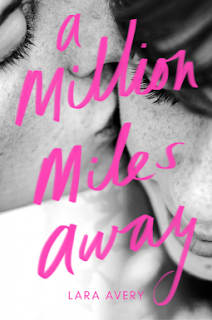 When high school senior Kelsey's identical twin sister, Michelle, dies in a car crash, Kelsey is left without her other half. The only person who doesn't know about the tragedy is Michelle's boyfriend, Peter, recently deployed to Afghanistan. But when Kelsey finally connects with Peter online, she can't bear to tell him the truth. Active duty has taken its toll, and Peter, thinking that Kelsey is Michelle, says that seeing her is the one thing keeping him alive. Caught up in the moment, Kelsey has no choice: She lets Peter believe that she is her sister.

As Kelsey keeps up the act, she crosses the line from pretend to real. Soon, Kelsey can't deny that she's falling, hard, for the one boy she shouldn't want.

Lara Avery delivers a breathtaking story of love and loss that is guaranteed to break your heart and sweep you off your feet.

A Million Miles Away by Lara Avery was a beautiful story about love, loss, and learning to live again. Lara Avery told the tale of Kelsey Maxfield a high school senior who had planned her life around being a party girl, auditioning for the KU dance team, her boyfriend Davies, and completely opposite of her twin sister Michelle. Michelle was a free-spirited intellect that loved the idea of love that was depicted by her numerous relationships that she ended before most could really begin.


Once Kelsey learns that Michelle is finally in for real “like” with her latest boyfriend and he in turn is too, tragedy strikes. Now with one half of herself gone forever, Kelsey along with her grieving parents try to cope as best they know how. Unfortunately, Kelsey decides to grieve by not only crying herself to sleep every night and enrolls in one of Michelle’s favorite classes, but she pretends to be her dead sister. At first, Kelsey claims she is doing it for Michelle’s boyfriend Peter, who has been deployed and doesn’t know that Michelle has passed away, and then she says she is doing it as a tribute for Michelle, but in the end she realizes all too late that her motives had changed and she is doing it for her own heart.


Kelsey really took Michelle’s death really hard and parents were too caught up in their grief that they missed it until she had gone too far. And as at the story progressed you really wanted Kelsey to just do the right thing by herself, by Peter, and by Michelle. But despite the warnings she had gotten from her friend, Pete’s friend, and even her own conscious, she continue along her grief stricken path of delusions and lies. She even broke up with her boyfriend, Davies, of three years.


Sure, there were signs that Pete could have picked up on where it was clear he was talking to someone other than Michelle. However, in his current circumstances, suffering from his own emotional turmoil of being away at war, I can see how he was simply grasping for anything that would keep him sane, focus on survival and getting back home. At times there was a part of me that hoped that he knew something was off, but he didn’t. He was too caught up in his situation to take notice.


I digress. I really liked this story. It was true drama with all of the twist and turns an emotional roller coaster. I could easily see this on the big or small screen, because it is not often that the protagonist can be both the antagonist at the same time. A Million Miles Away was well written and truly depicted teenage emotions. I think Lara Avery did a great job at portraying the logic and decision making process of a seventeen year old who is lost in grief and feels she has to get out of her sadness alone with no one watching.


Overall, I would give this book 4.5-stars and recommend that you run and read A Million Miles Away by Lara Avery.


A complimentary copy was provided via Netgalley in exchange for an honest review.