Deeper In Sin by Sharon Page 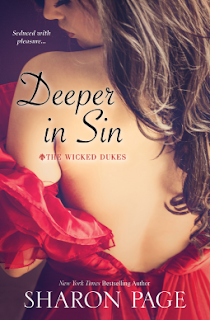 Passion Lost
Memories of a dark past have left the Duke of Caradon disinclined to have any fun. But at the urging of friends, he finds himself attending a Cyprian ball in the hope that some woman will attract his attention. And one certainly does. A stunningly sensual woman who reawakens feelings of carnal desire he thought long lost. . .

I have to say that I liked this novel better than I thought I would. Deeper in Sin by Sharon Page was an interesting tale in the Wicked Duke series where Sophie Ashley, who was a single mother, who had dreams of moving to London to become Victorian aged THOT. Sophia believed that with the aid of a journal her mother had written and abandoned, much like she did Sophia as a baby, would be all the instructions she would need to trick for treats and support herself. Conversely, the Duke of Caradon, or Cary, was a man needing to get his groove back after several horrendous events that had occurred throughout his life. From being kidnapped as a small child to being a prisoner of war, Cary has his demons to battle conquer in order to move on with his life.

This novel had a little of everything in it from catfights to murder that kept me turning the pages to see what would happen next. However, I could not get over the fact that someone would set out to be a THOT. I mean, I know that life happens and at times there are circumstances that occur that you have no control over, but a THOT? Well, I wasn’t the only one wondering the same thing as Cary spent a good portion of the story trying to convince Sophia that a courtesan or THOT was not the life for her. But no matter how hard he tried, she was convinced that was the life for her and her son. Sophie’s saving grace in her quest to become a TH…. I mean courtesan was that she wanted to be the best TH… courtesan she could be.


I digress. Outside of Sophia’s aspirations, I think there was a good story here. Sophia was clearly a good girl playing rogue, for a noble cause and Cary was obvious a good dude, despite his life’s circumstances. I was definitely happy with the ending, but it was hard for me to get through the beginning with her being so headstrong and determined to be that-hoe-over-there or THOT.


Overall, I will give this read 3.5-stars and would recommend you jog, skip, or whatever you need to do and read Deeper in Sin by Sharon Page.
A complimentary copy was provided via Netgalley in exchange for an honest review.