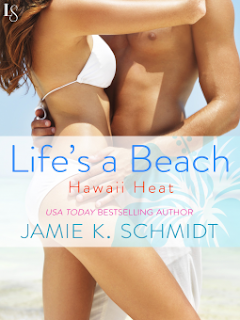 Sex on the beach has never been so much fun! USA Today bestselling author Jamie K. Schmidt kicks off a series set in paradise with an irresistible tale of second chances, secret identities—and a connection that's too sweet to miss.

When Amelia Parker arrives in Maui, newly single and unemployed, she's shocked to discover the resort she booked is actually a ramshackle little beachside hotel. At least the scenery is easy on the eyes—as is the toned, laid-back snorkel instructor, “Dude.” After two weeks of sun, serenity, and mind-blowing sex, she even accepts a job as the hotel's concierge. But what Amelia really wants is to relaunch the place completely. And that means convincing the absentee Wall Street billionaire owner, Samuel Kincaide, to take a chance on her.

Samuel has a plan, too: selling off every last reminder of his former life and chilling all day, every day as his slacker altar ego . . . Dude. He loves his romps in the ocean, and under the sheets, with the feisty Amelia. If she discovers his true identity, her boundless enthusiasm and innovative business plan will seriously diminish his hammock time. But when Amelia runs into real trouble on the island, he'll put everything on the line to keep her safe. He just hopes that the woman who's falling for Dude will feel the same about Samuel.
Includes a special message from the editor, as well as an excerpt from another Loveswept title.

Life's A Beach was very good! I mean I enjoyed this novel from the beginning to the end. Amelia Parker was an interestingly eclectic. I liked her. Her story was relatable to a regular everyday chick who was trying to make it in a big city. She had a boyfriend that was half-way committed to their relationship as she was all in and has been planning and paying for an entire year a surprise trip for the two of them to escape the cold and cruel winter of New York City.

However, Amelia’s bae has another bae on his mind and is caught red handed with said bae on his lap and Amelia is forced to take her exotic vacay with her clairvoyant aunt Zarafina. Once at her destination, Amelia, quickly realizes that nothing is the way it seemed, thousands of miles away, so Amelia and Zarafina makes the best of a not so great situation. Zarafina, begins offering psychic readings and such, while Amelia finds herself working and improving the hotel she is staying and finding the adventure and comfort she needs in the arms of Dude, a.k.a Samuel Kincaide.

You see Dude is, that dude, on the run from his past and on a quest for a life with no worries and I must say that I immediately liked him. I mean he was everything you would expect from your leading book boyfriend and more. I say this because he wasn’t perfect all the time, and that provided a pause from the norm and gave him an added appeal.

Overall, I loved Life’s A Beach, by Jamie K. Schmidt and could easily give it 5-stars and recommend you run and read this tale of second chances and do-overs. I think the story was well-written and well researched and provided me, the reader, with enough details that was not over-done. I enjoyed the banter between the characters and because this is the first book of Hawaii Heat series, I can barely wait to see what the second book, Beach Happens, has to offer.