Once upon a time, I had everything: money, power, a multimillion-dollar company, a loving family. Well, at least I thought I had everything. Then my parents died, and I found out my whole life was based on a lie. That’s pretty much the moment when I went numb. Told the world to f*** off and went on a bender of epic proportion, just to see how far I could fall before I hit rock-bottom.

Now I’m back and all I want in this world is my morning—okay, afternoon—coffee. Then one of my employees has the nerve to call me out for cutting the line at the coffeehouse at the company I own. Sure, I’m a little scruffier than usual, but come on, bitching out the CEO? Not a smart career move. Just who does this smart-mouthed ball-buster think she is? And more important, what do I have to do to get her number?

Holland O’Dell may be uptight, but I wouldn’t mind taking her back to my place and ripping off that business-casual blouse/skirt combo and burying myself in her curves. She pushes my buttons, but at least I’m feeling something. And whatever it is, I won’t stop until I get more.


“Mr. Big is the kind of smart, sexy delight that every woman deserves to read! [Delancey] Stewart will make you believe in true love in this steamy, heart-wrenching tale.”—USA Today bestselling author Sierra Simone

“With a smart, feisty heroine and hot, tortured hero, Mr. Big has everything I look for in a contemporary romance. Witty, sexy, and full of heart!”—Melanie Harlow, USA Today bestselling author 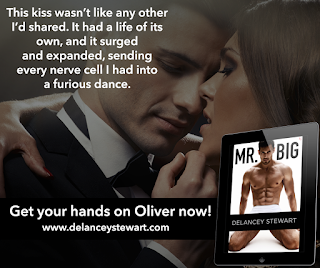 Get your hands on MR. BIG now:


Mr. Big by Delancey Stewart has left me with mixed emotions. The plot itself was intriguing and definitely enough to peak my curiosity to give this title a try. The dual perspectives was welcoming and who can say no to knowing both sides of a story. While, the main characters Oliver Cody and Holland O’Dell were likeable, for the most part, but by the time I had read the last word, I felt… I felt… bewildered.

I mean these two had enough self-imposed emotional baggage that they could not bear the weight or pressure of the possibility of them being happy. They just kept getting in their own way in a way that was one part shady and two parts annoying. I liked the premise and I even liked about 75% of this title, but something happened that felt as chaotic as the emotional state of these two that left me feeling...I don’t even know.


Don’t get me wrong, I really liked Oliver in this story. His story was well developed and although I cannot relate how to his charmed life being thrown upside down, I did feel some connection and resolve for his character by the end of the book. Now Holland on the other hand… well… whatever! I wanted to like her and feel something, but every time I was on the verge of some other than annoying, she triggered me back to feeling annoyed with her.

I digress. Overall, this was an okay read that was on the verge of incredible, until it wasn’t,  and as such I am going to give this one 3-stars and suggest that you just skip on over and read this one for yourself. The premise was good, but near the end it felt rushed and disconnected and the entire epilogue really, just blew it for me. Like did we really need that at the end…I mean I get it, until I didn’t.

This is one you really need to read for yourself, because is not bad or great...it just is.

Delancey Stewart has lived on both coasts, in big cities and small towns. She's been a pharmaceutical rep, a personal trainer and a wine seller. Despite lots of other interests, she has always been a writer.


A military spouse and the mother of two small boys, her current job titles include pirate captain, monster hunter, Lego assembler, story reader, and tech writer. She tackles all these efforts from her current home outside Washington DC.