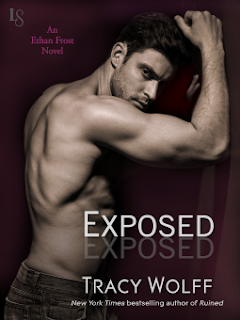 Will Ethan Frost go too far for the woman he loves?

The moment Chloe Girard walked into my life, she exposed secrets and emotions I always thought were best kept buried.

She wants to move on, to ignore the past. But I can't do that. Not when she still suffers. And not when the man who hurt her remains unscathed. So when I discover the perfect opportunity to make him pay for what he did to Chloe, I can't walk away, no matter the consequences.

But there's a fine line between justice and obsession. As I turn up old crimes and new lies, I know that I'm playing with fire—and risking the very foundations of our relationship.

My love for Chloe is absolute. I just hope it's enough to save us both.

I am going to begin by saying that I really enjoy Tracy Wolff’s, Ethan Frost novels. So, when I was given the opportunity to obtain an ARC of Exposed, via Netgalley, I was eager to catch up with Ethan Frost and Chloe Girard. However, I must say I struggled through this one as Exposed picked right up where book 2, Addicted, left us with Ethan and Chloe making-up yet again and planning a life together.
These two star-crossed lovers were planning a trip to Las Vegas with two focuses. The first being marriage and the second being for Ethan to continue to investigate leads to seek revenge on the man that raped the love of his life as a teenager, Chloe, and the man who also happens to be his younger half-brother, Brandon. So, with the agenda set, with Chloe only aware of a portion of the plan, the two of them, along with Chloe’s best friend, Tori, head off to “Sin City”


From the moment the plane lands things start to get very interesting. This was not just because the plot of the Ethan Frost series, but because Tracy Wolff had intertwined two new characters from her serial novel Play Me. These two characters, Sebastian, Ethan’s best friend and college roommate, and Aria, Sebastian’s love interest. These are two strong characters in their own and seamlessly played supporting personalities to Exposed.
I digress. In Vegas, Ethan and Chloe accomplished everything they set out to conquer on their trip, they become husband and wife and Ethan uncovers some other secrets of his brother.  However, this is only the beginning for the series of events that follow that led the story getting better and was the motivation I needed to continue on to see what the end was going to be.
Overall, I liked Exposed by Tracy Wolff. I didn’t love it because in the beginning I found that it was a real drag. Sure there were some steamy scenes, but with some much more that this novel had to offer, those scenes seemed like fillers or distracters from the actual story. I am such a fan of Tracy Wolff, so would give this novel 3.5 stars and recommend that to you enthusiastically skip on over and read Exposed by Tracy Wolff.
A complimentary copy was provided via Netgalley, in exchange for an honest review.
Book 1: Ruined http://goo.gl/Qs7p8w
Book 2: Addicted http://goo.gl/9rMDC6
Posted by Run and Read That... at 5:41 PM