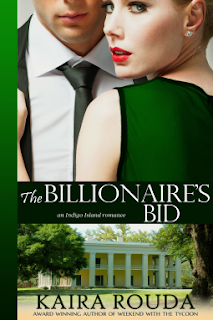 Handsome tycoon James Putnam is acting CEO of his family’s logging company, Putnam Industries. He needs to land a big deal to prove to the board he’s capable of taking over the company. If not, his father’s right-hand-man Walter is more than willing to fill the role. James hurries to Indigo Island alone, certain he has what it takes to land the deal.


Aubrey Templeton is a gorgeous magazine reporter facing a mountain of debt after her parents’ tragic deaths. The only asset she has to leverage is 2,500 acres of land on Indigo Island. She hires Dirk Cooley, a forester, to create a forest management plan for her family’s land and to solicit multiple logger bids to lease the land. Aubrey makes sure James Putnam’s company is included. Aubrey and James shared a night she’ll never forget and she’s certain, once he sees her, he’ll want a repeat as much as she does. What she doesn’t know is that Dirk’s goal in life is to destroy the Putnam family and he doesn’t care who goes down with them.


Will James recognize Aubrey as more than a sexy landowner? Could she become a partner in both love and business? Will they uncover Dirk’s plot before it’s too late? Will they recognize the common roots that lead to love?

The other day, I randomly woke up at three o’clock morning and could not go back to sleep. So, I did what any self-respecting booklover would do, I began reading Billionaire's Bid by Kaira Rouda. This was a quick read that finished just as the sun was rising about a reformed playboy James Putnam trying to prove that he is capable of taking over the family business and Aubrey Templeton, who had a one night stand with him a year ago accepting bids to pay off her family’s debt after a tragedy.


Now I must say I did not have high hopes for this read, because more or less, I was looking for something that would make me fall asleep. However, what I found was a sweet little story about family, honor, and second chances. As Aubrey, was trying to rekindle the flame between herself and James, he sadly didn’t even remember that the flame was even lit and fought to prove that not only was his company the best to save her family’s land but also to somehow allow him to make it up to her.
Aubrey is utterly embarrassed but cannot deny that there is something there between her and James, as she tries to salvage the deal that her two-faced, forester, Dirk Cooley was working clearly not in her favor. This dude has had a life-long grudge against James and set out to do everything in his power to ruin the Putnam family’s name.  Honestly, at one point of the story I couldn’t tell who or what Dirk had the biggest crush on, Aubrey, her land, or James, because his rivalry had turned into a twisted obsession.
I digress. Overall, this was a good story with a little mystic from the low country of South Carolina that was a sweet and short read that I will give 3-stars because the pace was a little erratic. Some parts it dragged and some parts it flew by and left me wondering if I missed something. Therefore, I would recommend that you skip on over and read the Billionaire’s Bid by Kaira Rouda.
A complimentary copy was provided via Netgalley, in exchanger for an honest review.
Posted by Run and Read That... at 5:16 PM